A journey with autism

When autism came knocking at Ilana Gerschlowitz’s door, she didn’t give up.
She fought for him, and for others with this diagnosis, too. 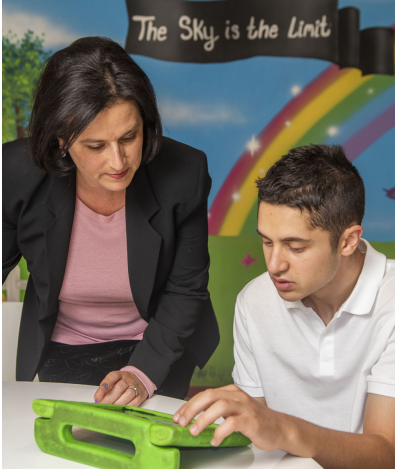 Ilana and Martin Gerschlowitz were an ordinary South African couple. Young. Newly married. Bright, promising futures ahead. That is before autism came knocking on their door. For ten months, their baby David was perfect … smiling, lifting his head, playing peek-a-boo. Then came recurring ear infections, diarrhoea, and a high fever which led to hospital. When he got home, everything had changed. “We suddenly noticed that our son didn’t want to look at us anymore. This was frightening. He also showed no interest in playing our usual games of peek-a-boo. The laughs, smiles or reactions that ‘normal’ babies his age use to communicate were gone; the sparkle in his eyes had dimmed … and the countless trips to doctors, specialists and therapists began. Life as we knew it – and as I’d so carefully planned it – was over,”says Ilana. At 20 months, a developmental specialist delivered, quite harshly, the diagnosis. David had autism. “He will never speak, go to school, be toilet-trained, have friends, get married, or hold down a job. Take out an insurance policy and see a psychologist,” she said. Unwilling to accept the hopelessness of an autism prognosis, the couple set out to rescue him from the fortress that kept him from them. Never giving up, Ilana spent every waking moment researching the illness until she found answers. And when autism struck again, threatening another son’s future, their mission became clear. This was not a fight they were prepared to lose.

Subsequently, drawing from international experts, Ilana has gone on to help countless children facing learning challenges. Raised on a farm in the Free State, moving to Joburg to pursue a career in law – she completed her B.Com (LLB) at the University of the Witwatersrand and was subsequently admitted and practiced as an attorney. In 2009 Ilana hosted the landmark Challenging Children Conference in South Africa. This event provided a platform for the presentation of the latest treatments and developments in autism. She then went on to become the founding director of The Star Academy, a specialist autism centre that has academies around the world, and which is affiliated to CARD, world leaders in autism treatment. The academy provides applied behavioural analysis instruction to children with autism. Ilana also established Catch Up Kids, which helps children overcome learning challenges. She continues to light the way for many parents who are battling autism or learning difficulties. She’s now written a personal memoir … a story of a journey few parents would ever want to encounter, a story of the tenacity of a mother fighting to give her children their best lives, and achieving the apparently impossible. In her prologue, she writes ”In telling our story, we share what we have gone through and the details of David’s diagnosis and treatment, passing on our first-hand knowledge and experience of what it means to be the parents of a child with autism. What we’ve learnt over the years is that in autism there is only one constant – which is that each child is different. As the saying goes ‘If you’ve met one individual with autism, you’ve met one individual with autism.’ This book is not just about David’s story. It’s about a family with three beautiful boys, and our journey into the world of autism. This is our story of staggering heartbreak, searing honesty and, most importantly, monumental victories.” 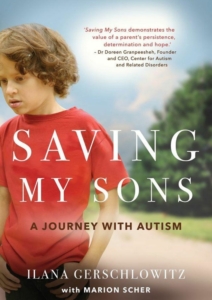 Saving My Sons – A Journey with
Autism by Ilana Gerschlowitz
with journalist Marion Scher.