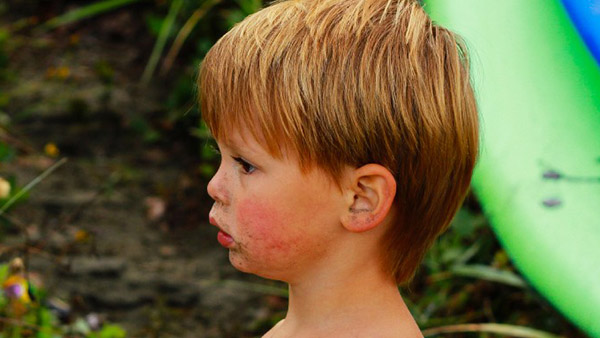 His cheeks told me.

We’d already known my son had a dairy sensitivity as a baby, but we thought he had outgrown it. His original infant symptoms had disappeared.

But by age 3 we were having a very tough time with him behaviorally. (That is putting it quite mildly — I was losing my marbles and my husband was happiest not-at-home.) There were tantrums, constant meltdowns, severe hypoglycemia, and severe anxiety.

Our pediatrician recommended we try eliminating foods to see if that helped. We were surprised. At that point we simply had no idea that food could be affecting his brain and causing these behavioral symptoms. We were clueless about the food-brain connection, but desperate to try anything. So we gave it a go.

It can be tricky business identifying the culprits of food sensitivities. Dairy and gluten are the big ones, so I wanted to start there. But I had reason to believe they weren’t the full answer for us. One big reason, actually — my son’s cheeks.

That, and yogurt and jam.

You see, every time we gave him dairy-free yogurt his cheeks would get red and blotchy. Same thing with raspberry jam. Our nanny at the time kept telling me in Spanish, The jam does not like him. She noticed his cheeks right away, too.

I’m certain there were other foods that also did it. But for whatever reason I never isolated them as clearly. Just the dairy-free yogurt and raspberry jam. Such random, unrelated foods.

I felt like his cheeks were talking to me. If only I could figure out what they were saying.