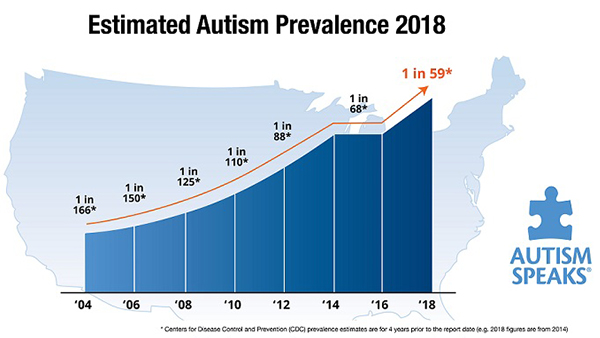 The Centers for Disease Control and Prevention (CDC) today released its biennial update of autism’s estimated prevalence among the nation’s children, based on an analysis of 2014 medical records and, where available, educational records of 8-year-old children from 11 monitoring sites across the United States.

The new estimate represents a 15 percent increase in prevalence nationally: to 1 in 59 children, from 1 in 68 two years previous.

However, prevalence estimates varied widely between monitoring sites, with significantly higher numbers at sites where researchers had full access to school records. This suggests that the new national numbers reflect a persistent undercount of autism’s true prevalence among the nation’s children.

“These findings demonstrate that while progress has been made on some fronts, there is still much work to do,” says Autism Speaks President and Chief Executive Officer Angela Geiger. “They urgently warrant a significant increase in life-enhancing research and access to high quality services for people with autism across the spectrum and throughout their lifespan.”

Autism Speaks calls on legislators, public health agencies and the National Institutes of Health to advance research that helps us better understand the increased prevalence and the complex medical needs that often accompany autism. In doing so, policy makers should follow the U.S. Interagency Autism Coordinating Committee’s recommendation to double the autism research budget.

Key findings of the new report include:

* But estimated rates varied, with a high of 1 in 34 in New Jersey (a 20 percent increase), where researchers had better access to education records. On the low side, autism’s estimated prevalence in Arkansas was just 1 in 77. “This suggests that the new national prevalence estimate of 1 in 59 still reflects a significant undercount of autism’s true prevalence among our children,” says Autism Speaks Chief Science Officer Thomas Frazier. “And without more and better research, we can’t know how much higher it really is.”

* The gender gap in autism has decreased. While boys were 4 times more likely to be diagnosed than girls (1 in 37 versus 1 in 151) in 2014, the difference was narrower than in 2012, when boys were 4.5 times more frequently diagnosed than girls. This appears to reflect improved identification of autism in girls – many of whom do not fit the stereotypical picture of autism seen in boys.

* Disappointingly, the report found no overall decrease in the age of diagnosis. In 2014, most children were still being diagnosed after age 4, though autism can be reliably diagnosed as early as age 2. Earlier diagnosis is crucial because early intervention affords the best opportunity to support healthy development and deliver benefits across the lifespan.

“It’s encouraging to see evidence of improved identification of autism in girls and minority groups,” Dr. Frazier says. “We must continue to narrow this gap while greatly speeding up the time from first concerns about a child’s development to screening, diagnosis and intervention. If most children aren’t being diagnosed until after age 4, we’re losing months if not years of intervention that can deliver benefits throughout their lives.”

* The new report found that new diagnostic criteria for autism adopted in 2013 (DSM-5) made only a slight difference in prevalence estimates. Autism prevalence was slightly higher (by 4 percent) based on the older (DSM-IV) definition of autism compared to DSM-5. Future prevalence reports will be based fully on the DSM-5 criteria for autism and provide a better measure of the change’s impact.

* The nation still lacks any reliable estimate of autism’s prevalence among adults. As autism is a lifelong condition for most people, this represents an unacceptable gap in our awareness of their needs – particularly in areas such as employment, housing and social inclusion. Each year, an estimated 50,000 teens with autism age out of school-based services.

A wide range of resources for recognizing early signs of autism and for accessing support and services throughout the lifespan are available at AutismSpeaks.org.

Autism Speaks encourages people to go to AutismSpeaks.org  and volunteer, donate and get others to come on board. Now is the time to make a difference for the millions of people with autism worldwide.